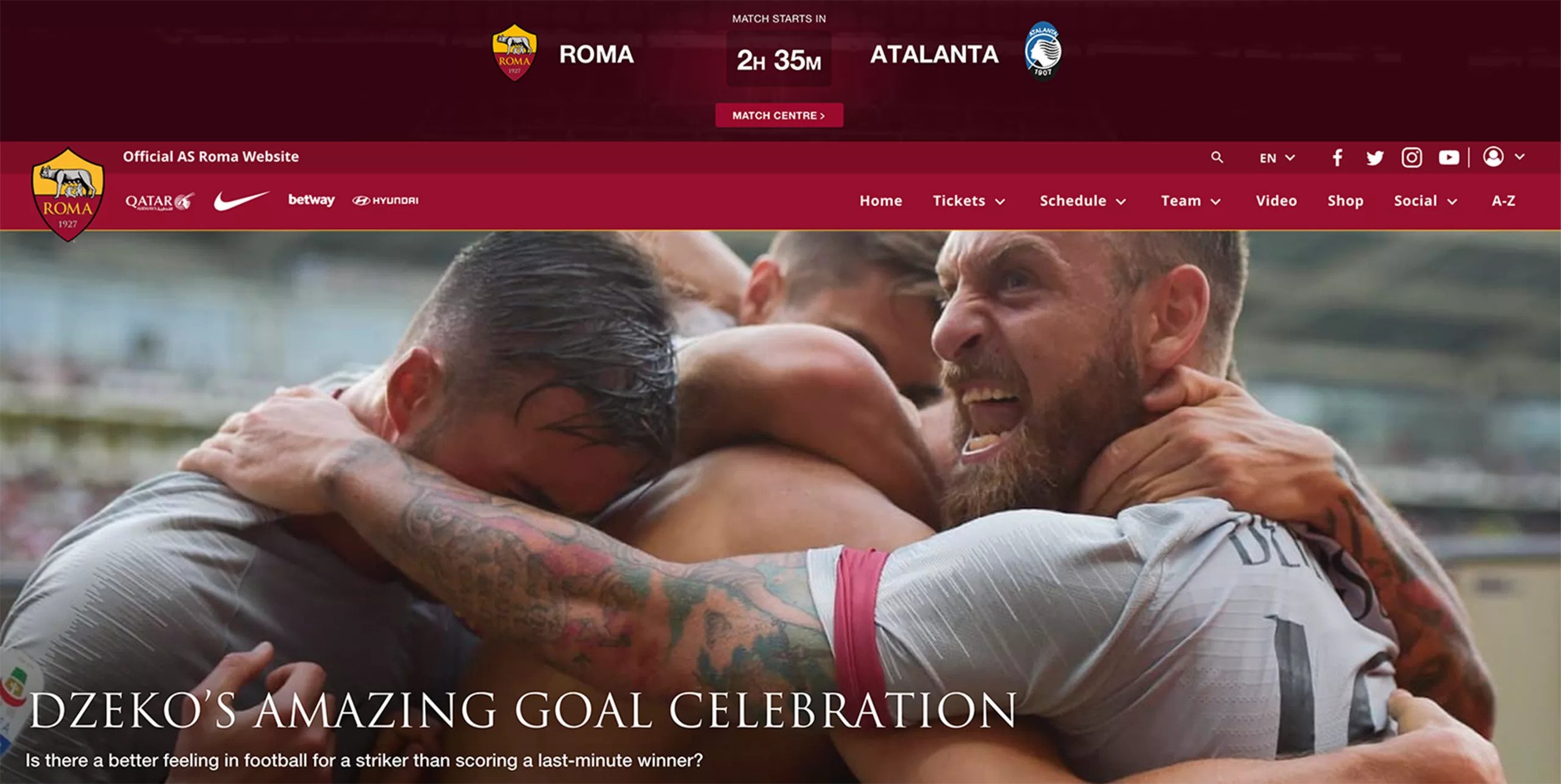 As the Head of Digital for Serie A soccer club AS Roma, Paul Rogers has witnessed firsthand the power of the connected fan. In 2015, he used Reddit to crowdsource fan feedback that inspired an award-winning website, and now the club is back at it again.

Speaking with Hashtag Sports for a quick chat after the refreshed site launched, Rogers discusses the role a website plays in a team’s marketing funnel, the ways digital is impacting sponsorship sales, and how the club is winning on social with one simple trick: being human. For clarity, this interview has been condensed and edited.

Your club [AS Roma] just re-launched its flagship website. How did the “connected fan” influence strategy for creating this new user experience?

When we launched the website originally in 2015 with Omnigon, it was a complete rebuild from scratch. We ditched everything we had before, and basically put out something completely new.

We reached out to the fan community [on Reddit] and took their input on what they thought should be on it, everything from the content proposition down to the navigation and functionality we were going to offer.

We didn’t have to rip everything up this time around. So I think the initial idea about connecting with the fan on what we do, and making it much more engaging and an experience resembling social media was something we wanted to carry over.

AS Roma made history in 2015 as the first club to use Reddit to crowdsource ideas for its website from avid supporters. The site was ranked as 6th-worst in the Champions League at the time and is now in the top ten. What did you learn from the experience of listening to and implementing fan feedback?

It was quite interesting actually. I was back on Reddit within hours of us launching, and fans were pointing out stuff about the relaunch that they didn’t like.

I think you might get a wider cross-section of your fan base on Reddit than by conducting focus groups—not to dismiss focus groups as a way of doing things, but because social media has people who truly use [your] website and are the most dedicated fans.

To be honest, the best feedback we ever see is negative feedback. It’s nice if you read [positive] comments, but they’re less helpful. We’re more interested in stuff where somebody criticizes something. 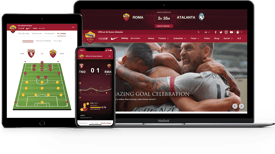 2015 isn’t that long ago, and the site just received honors last year. Is it the fans or the technology that’s evolved so rapidly in three years to already require a tune-up in 2018?

I think it’s a bit of both. Technology definitely moves on all the time, and that’s driven by the social media companies who are constantly innovating at scale. That in-turn affects user habits. Netflix is now so common that people understand the concept of paying for video content, and they certainly will pay for premium video content.

It’s easy to broadcast live now on Twitter or Facebook, and the fact that things like Instagram Stories and Snapchat exist show how people are consuming content in different ways. So I think they go hand-in-hand. Technology dictates or influences how fans change.

We’ve seen a trend emerge in which sports properties and brands are bringing their digital work in-house. What’s your approach to partnering with technology and service providers vs. executing in-house on AS Roma’s digital initiatives?

It all comes down to what you’re looking for and where you’re going to place your resources. We’re not a tech company, but we probably are a content company. We can choose to invest in tech, great developers, programmers, and designers, but the world moves so quickly.

One of the biggest advantages we have in working with Omnigon is we can go there with an idea, and they can help us make that a reality. One day we might be talking about launching a messenger app and another day we might be talking about better integrating social media or launching a subscription service. Omnigon obviously has those skills, and where they don’t, they know who to bring in to help us achieve those sorts of things.

Omnigon has worked with the NFL, they work a lot in golf; they’re across different sports, particularly American, so we try and learn from that as well. We don’t really look at other football clubs for inspiration; we try to look outwards.

Is there something great that the NFL is doing that we might be able to take inspiration from and try to create? I don’t think we would try and become a tech company anytime soon because it just moves so fast.

There’s no such thing as a digital strategy anymore, it’s a brand strategy—or a club strategy—and digital is all encompassing.

Where does the website fit into the club’s overall marketing/engagement funnel?

Fundamental. More and more people spend time on social because there’s so much content to consume, but I see the website as a flagship platform for us. We control it, and we control what people see which we obviously can’t do on social media.

I’m in Rome at the moment. In that same light, if I walk down some of the streets, there’s a massive beautiful Gucci store, there’s a Versace store, there’s all of these flagship stores, but to be honest, they’re really show pieces for the brand.

Most of their revenue, I would assume, is coming from online and other means. But they have these beautiful stores on expensive streets which I think sends out a message of who you are.

I see the website a bit like that. We really want to have a classy website that’s as good as any team in Europe. I think we had that; we were certainly one of the best websites in Europe with the version we had before, but we wanted to enhance it again to make sure that we keep innovating in that space.

How has the connected fan changed the way AS Roma thinks and operates?

The biggest change from 2015 to 2018 for us is that the digital team is in the meetings with sponsors from the start. Even before we teamed up with Qatar Airways to become our shirt sponsor, we were in those discussions.

Digital and social are such an important part of any sponsorship in this day and age, and brands are interested in hearing how we’re going to activate it, what the ideas behind it are, what’s the strategy, and how it aligns. I think that benefits the sponsors, the club, and the fans.

Ultimately what you’re going to deliver from that partnership is going to be much better than if it’s all done in silos.

What used to happen is brands would have a digital department, a content department, a marketing department, sponsorships sales team, etc. But everything has become digital so there’s almost no such thing as a digital strategy anymore, it’s a brand strategy—or a club strategy—and digital is all encompassing.

In the past there could be friction in those areas, and digital was handed something and you’re like “Okay, what are we supposed to do here?” I’ve seen it on both sides of the table, but we’re not really looking for a contract-based partnership approach, we’re looking for a fully-ingrained, immersive partnership.

How are you using the website as a platform to create new opportunities for partners who are eager to reach fans digitally?

In terms of our partners, they want their content to be seen and readily available. We can put it front and center, and we’ve certainly integrated sponsors in a better way than we could have on our previous site.

One very cool branded content partnership we’ve just done is with Warner Bros, and they’ve shot a fantastic trailer for one of their new films featuring our players. They took it to L.A. and applied special effects and made a really cool piece of content.

Is it a good piece of content, or is it an ad? If it’s an ad then fine, but we’re trying to make quality content with our sponsors.

AS Roma has been called one of “the weirdest” clubs on social media. How would you define your strategy?

When people talk about us being “weird” on social media, I think that’s because we’re a bit different. There’s a human behind the keyboard. Our website is more of a vehicle for corporate communications which is different than social media. We try to have a personality, and to be honest, I don’t find it that weird because that’s how I consume content. It’s weirder to me that in 2018 other clubs continue to talk at people.

We have a lot of followers who don’t support Roma. They like Roma, but they may support Bayern Munich or they may support Liverpool, Man United, or anyone. They choose to follow us because they enjoy the content.

Football is supposed to be entertainment, and it’s also supposed to be about rivalry. It’s not supposed to be corporate or about spreadsheets, and financial fair play, and net spend, and all the legalities of what the game has become—which is about money.

You’re not supposed to be depressed by it [laughs]. So we try to project that sort of fun into it because to be honest, that’s what we like.

How do you measure success on social?

The number one thing is—and one of the biggest differences between 2015 and 2018 —we’re not really concerned with social followers in terms of numbers. All of these clubs have millions, and in some cases, hundreds of millions of followers. I think we all got caught up in it back in 2007 or 2008 when it all started.

All we really care about is engagement.

When we talk about engagement the best metric we can ever have is people sharing content, whether that’s retweeting, sharing or re-posting our content. The way I see it, everyone has their own personal brand these days so if they share a piece of content, it means that they believe it’s good for them, it’s good for their followers, and it looks good on them. That means it must be credible in some way.

Learn more about the ways teams are innovating to meet the needs of the connected fan at Hashtag Sports, an annual conference designed for digital decision makers.