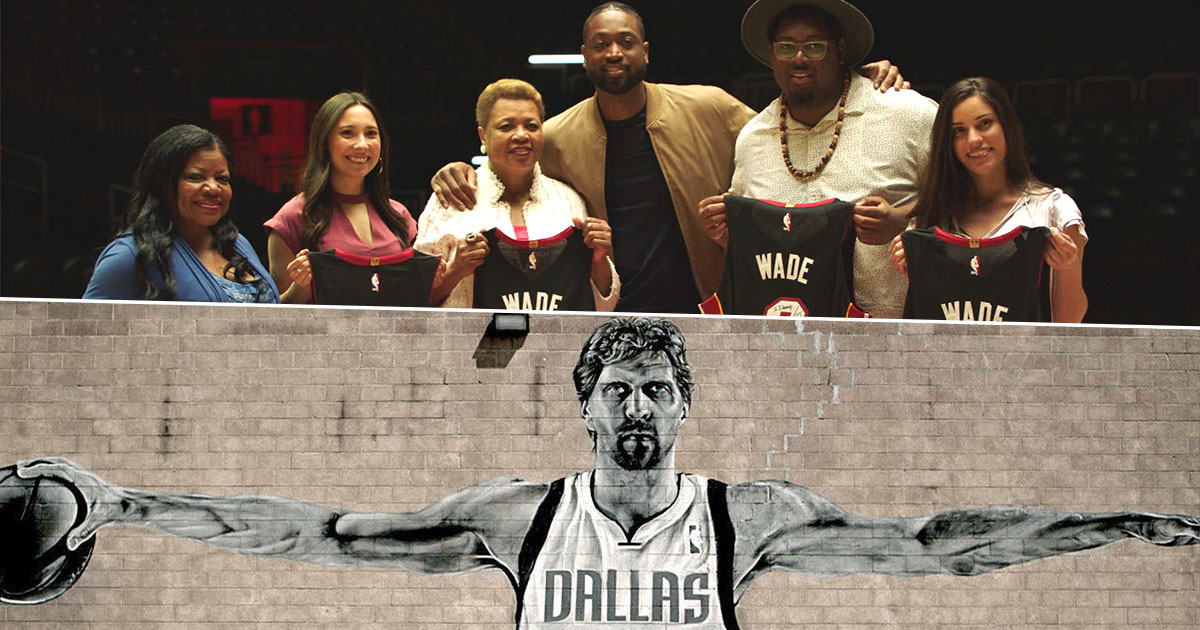 There have been few NBA campaigns in recent memory that have had such a high-profile farewell tour for one player, let alone two of them. But as future Hall of Famers Dwyane Wade and Dirk Nowitzki watch the sun set on their careers the emotional tributes have poured in from fans, teams and brands.

Budweiser and VaynerMedia worked with Wade to create this spot, “This Bud’s for 3.” The video dives into Wade’s infamous jersey swaps with players from opposing teams throughout the season and presents him with five more individuals he’s made a positive impact on to “swap” jerseys with before the season ends. We could go on, but to really understand the impact of this ad, give it four minutes of your undivided attention and you’ll understand.

While Budweiser paid tribute to Miami’s favorite son with an emotional farewell, DAZN put together this spot to honor the best European basketball player ever, Dirk Nowitzki.

They did so with a more upbeat tone and the mantra #ALL41, playing off the number he’s worn for his entire career. With creative help from Kolle Rebbe, the streaming service honored the 7-footer German’s career, which has been as iconic as his one-legged fadeaway shot.

UNTUCKit made their first foray into the sports landscape with a cheeky stab at NFL officiating in this ad, featuring investor and brand ambassador Drew Brees, and let’s just say we think they made the Right Call.

The duly named spot, from the minds at Amalgam, parlayed the shirt maker’s traditional campaign around creating the right shirt to wear untucked—with a little bit of fun from the sports world.

Tiger Woods won his 5th Masters and first major in over 10 years, and Nike, as one of the few sponsors who stuck by him through the turmoil, was prepared. They rolled out this spot, “Same Dream,” moments after his emotional victory.

The ad which was created with help from Wieden+Kennedy, took a turn down memory lane as it highlighted the triumphs and most painful moments throughout Woods’ career. It served as emotional storytelling at it’s best while stirring up the question everyone is asking again: Can Tiger catch Jack Nicklaus?

If there has ever been an ad with more star power, good luck finding it. Beats By Dre rolled out this spot to hype the upcoming release of their completely wireless headphones and to say it was a success would be an understatement.

The energetic spot utilized a unique camera tracking capability to be sure that Beats was front and center, and by tapping into the reach of the athletes seen in the video Beats and Zambezi were able to reach an incredible audience (on Instagram alone the ad reached over 100M followers due to the fanbase of followers the athletes have).

Damian Lillard and Joel Embiid were first to sell out, and now Giannis is joining them on Hulu’s team. All he has to do, wear some interesting looking slippers that help convince people to join the streaming service.

The spot continues Hulu’s relationship with Big Family Table which has seen the agency help them create some of the funniest yet most straightforward ads out there.


This week in sports advertising, Uber Eats mixes up its Sweet 16 celebrations, BodyArmor takes a stab at Gatorade, and Budweiser releases "Impact," a short film about Jackie Robinson.