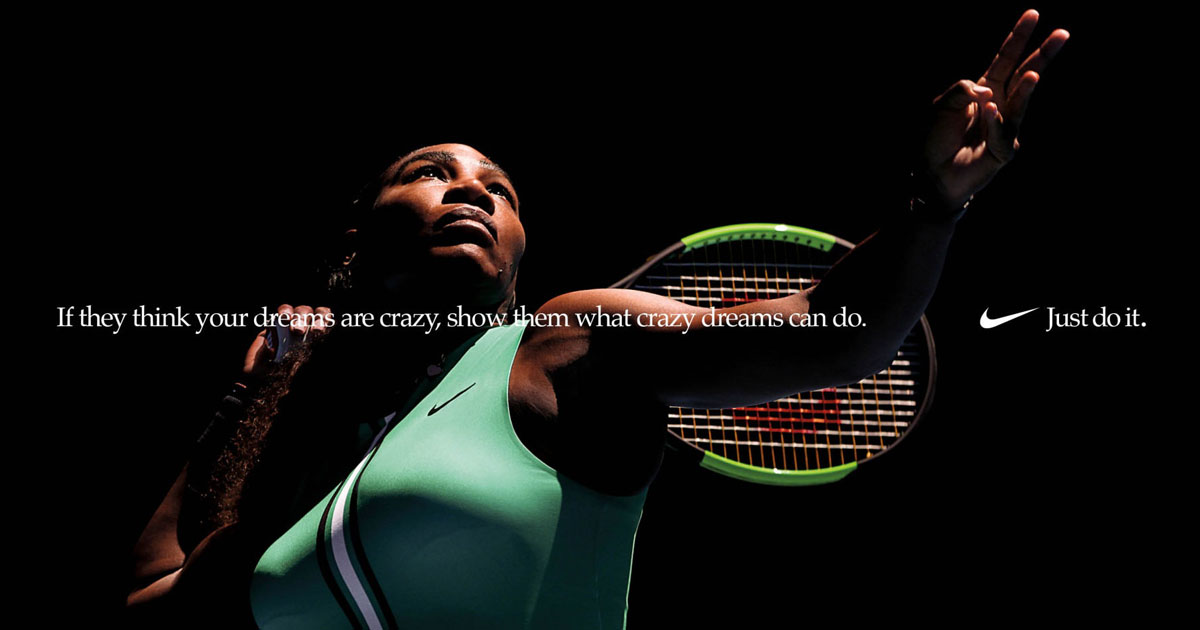 Nike and Wieden+Kennedy continued their excellent storytelling streak on Oscar Sunday when they unveiled “Dream Crazier.” A follow up on the critically acclaimed “Dream Crazy” spot, “Dream Crazier” poignantly redefines the prism through which crazy good female athletes are viewed.

The spot, narrated by Serena Williams, hits the nail on the head in exposing the double standard female athletes constantly face on the road to greatness. Nike not only raises awareness of the inequality in sports with this campaign, but they also remind everyone what crazy can achieve.

Champion started creating athletic apparel in 1919. To commemorate their centennial, the sports apparel brand launched a new campaign, “100 Years for the Team.” The spot celebrates the teams they’ve outfitted throughout their history, including the iconic Dream Team from the ‘92 Olympics and calls on future generations to join Champion in their quest.

The campaign, which features Magic Johnson, shares the stories of groups across the globe who have come together to create communities empowering the members within them.

The Major League Soccer season is kicking off this weekend, and they’re welcoming soccer back with the “Live Your Colors” campaign. The spot is centered around their revamped app and its focus on personalization and fan experience. The app’s technology gives users a customized feel, allowing them to buy merchandise, tickets and watch highlights of their favorite team.

The spot itself features the Bolt, a high-speed cinebot, or a robotic arm that holds the camera. Thanks to EVO, here’s a cool behind the scenes look at the Bolt in action.

Natural Light is encouraging people to have epic days filled with memorable stories in their new Naturdays campaign, with the help of M&C Saatchi Sport and Entertainment NY. They enlisted former Indianapolis Colts punter, Pat McAfee, to share his own Naturday story in this spot, “Red 18.”

The campaign encourages fans to share their own Naturday stories with the chance to have them turned into cartoons on Natural Light’s social channels. In addition, Naturdays’ packaging design is getting reimagined as a paint scheme for JTG Daugherty Racing’s No. 37 car at NASCAR’s Las Vegas 400.

State Farm went back to the Houston Rockets well, teaming up James Harden and Chris Paul once again to show how their State Farm agent can save the day when things go awry. Paul already had his garage destroyed by a Milwaukee Buck but this time it’s his own furry friend wreaking havoc on his home.

The Houston Rockets’ mascot, Clutch, only knows one thing, fun. In this entertaining spot, all it takes is the familiar tune of House of Pain’s “Jump Around,” and Clutch has the t-shirt cannon out and firing on all cylinders. Lucky for CP3, his State Farm agent is there to end the chaos…but it’s too little, too late.


This week in sports advertising, Damian Lillard and Joel Embiid let us know Hulu has live sports, Adidas changes the conversation around running, and The Rec League helps New Balance center your attention on Kawhi Leonard.