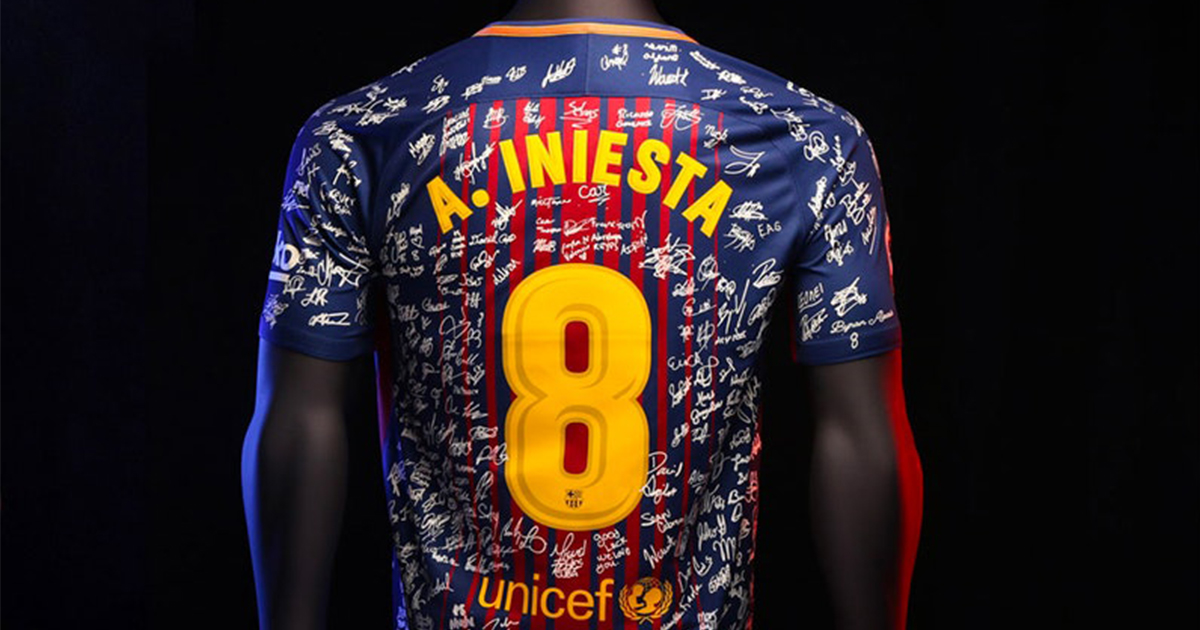 The following interview with Juan Ochoa, Director of Marketing at beIN SPORTS, is part of our Campaign Spotlight series, which examines this year’s Hashtag Sports Award-winning work. Farewell Jersey won for Best Real-Time Engagement, which recognizes outstanding interaction with fans on social media that was a direct response to a live game, current event, or cultural phenomenon.

What unique objective or goals led to the creation of this work?

Playing for FC Barcelona for 21 years, Andres Iniesta’s retirement announcement from the club shook the soccer community. beIN SPORTS, the sole broadcaster of his LaLiga matches in the U.S., wanted to connect him with fans once more through a first-of-its-kind virtual, farewell jersey: his jersey personalized with fans’ signatures – a tradition he usually did for his fans.

How was Farewell Jersey designed and produced with the modern sports fan in mind?

As a network, beIN SPORTS is always seeking opportunities to engage with its fans at a more intimate level. Soccer being a significant passion point in the lives of fans, we knew that Iniesta’s retirement from FC Barcelona would have a huge impact on them – particularly to the network’s large Barcelona and Spaniard fanbase. By developing a way for them to bid farewell to their “Capitán”, beIN SPORTS positioned itself as more than a network delivering news and highlights, but one that wants to build stronger connections between the fans and their favorite players. Across the globe, fans were tweeting and sharing their sentiments over the announcement and expressed gratitude towards his years with Barcelona – we knew we needed to do the same.

In a fully organic, integrated and reactive social activation, beIN SPORTS encouraged fans everywhere to virtually sign their signature through Instagram Stories. Fans would take a screenshot of our story, trace their signature – leveraging a tool they were already familiar with using – and then would direct message the image back to beIN. This interaction was not only native to the platform, but natural and seamless for consumers.

Throughout the effort, fans shared their outpouring of love for Iniesta and thanked beIN SPORTS for creating a meaningful way for them to say goodbye. Word spread quickly about the campaign, which was promoted on various channels including social media, during the broadcast of the LaLiga’s Barcelona vs. Levante match as well as on-air programming. It even captured the attention of former teammates and soccer stars like Jonathan dos Santos and league organizations like LaLiga who wanted to take part in the action. Through community management and capitalizing on all of the features Instagram has to offer, beIN SPORTS was able to capture stories of what the iconic star meant to fans and connect with them throughout the process and final output.

Fans engaged with the content from start to finish. When the jersey was revealed on social meda, fans were excited to identify their signatures. They loved it and even asked if the jersey would be made available for purchase.

For this activation, “Excellence in Engagement” came to life in two ways: the unique mechanics of how fans participated and the once-in-a-lifetime reward they received from the activation. In a fun, modern way, beIN SPORTS offered 1,000+ fans a meaningful way to say goodbye to their soccer idol.

How and why did Instagram fit into your overall strategy for this campaign?

Instagram was instrumental in the success of the campaign. It not only provided a platform to reach our audience, easily and seamlessly but also gave fans a way to create a once-in-a-lifetime memento for a soccer legend. Had it not been for Instagram Stories, its capabilities, and the user’s familiarity with the platform the Farewell Jersey would not have been possible.

Beyond the activation, the campaign helped build upon the network’s overall strategy of increasing fan engagement on social. It drove more users to check out the content and become active participants with the channel’s various initiatives.

beIN SPORTS USA was one of only 25 inaugural Hashtag Sports Award winners. What does this honor in engagement excellence mean to beIN SPORTS USA and the Farewell Jersey campaign?

beIN SPORTS is incredibly honored to be a part of the inaugural class of Hashtag Sports Award winners. This is a true testament to the impact the channel and campaigns can make for the fans. The network strives to continually bring fans to the center focus and provide them more experiences to be a part of the action in timely and relevant ways. Their engagement and involvement with our content are of the highest importance to the network and something we hope to continue to grow.