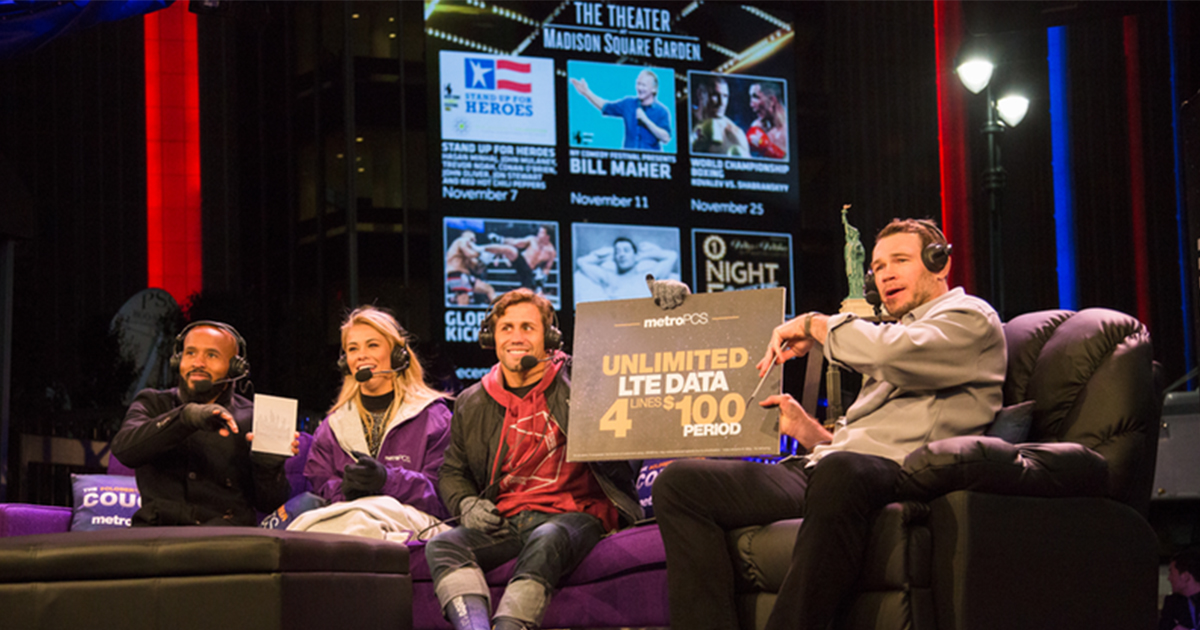 The following interview with Lagardère Plus Director of Consulting & Activation, Adam Gotts, is part of our Campaign Spotlight series, which examines this year’s Hashtag Sports Award-winning work. The Metro by T-Mobile Purple Couch won for Outstanding Use of Twitter, which recognizes the most innovative and effective use of Twitter to engage an audience of connected fans and consumers.

What unique objective or goals led to the creation of Purple Couch?

Metro has partnered with the UFC for over seven years, and as the sport and sponsorship have evolved we must continue to find ways to engage and add value to the fan. The sponsorship’s primary objectives have been to drive awareness and familiarity with the brand, but recently the focus has shifted lower in the funnel to consideration.

To accomplish this, we needed a platform to engage the fan with longer-form content and tell the Metro story while also making their UFC experience better. The UFC platform is largely supported by a PPV model, and social media allows brands to own more of the content and distribution to complement traditional advertising. UFC fans are highly engaged on social, so naturally, it became a big focus for the brand. We set out to fill a void around marquee fights through a live 90-minute brand-owned broadcast.

UFC fans are rampant on Twitter before, during and after fights – it’s where the conversation happens. So while our program is focused on the big platforms driving live video consumption, including Facebook and YouTube, we leaned into Twitter Live this year as they have enhanced their live product.

You’re missing the trash talk and exclusive analysis live from #UFC235 in Las Vegas. See what @Cowboycerrone had to say about @TheNotoriousMMA. Who you got? #KnockoutCoverage

How was the campaign designed and produced with the modern sports fan in mind?

Some of the biggest stars in the UFC sat back, and put their feet up on the couch in Metro’s signature Purple Socks for this one-of-a-kind, interactive program for fans. This format with five branded segments symbolizes a game-changing mindset led by our team, who created a secure environment for athletes to connect with our audience.

Metro by T-Mobile focused on Twitter Live to take the program to new heights and expand distribution for the modern fan. This allowed the brand to take advantage of Twitter’s most advanced ad units, such as reminder cards that notified fans when the broadcast is about to go live.

Our tactics drove awareness and tune-ins for the broadcasts through Twitter, including hype posts utilizing fighter talent, and clips edited in real-time from the broadcast to drive views of the stream.

We’ve worked with key personalities in the MMA space, such as HOF’er Forrest Griffin, popular animated influencer Tommy Toe Hold, and UFC Correspondent Megan Olivi, to bring familiar faces to our broadcast. Our hosts have taken over Reddit’s MMA thread to answer questions and hype the show. And of course, we give away PPV codes and Purple Socks to reward fans that engage live.

We have broken the mold, dominated the social conversation, and fans now turn to Metro by T-Mobile for UFC pre-fight content. Below are some highlights and metrics from 2018 as well as overall:

Ahead of UFC 229 Khabib vs McGregor, the Purple Couch was used as a platform to introduce the new Metro by T-Mobile to the public for the first time. The broadcast garnered over 34M impressions and 14M video views, making it the most-watched broadcast to date and allowed the brand to control the social conversation around the biggest UFC event in history.

WATCH NOW! The biggest names in the @UFC are teaming up with @MetroByTMobile to bring you LIVE exclusive analysis before #UFC235.

Ask a question using “#MetroContest” for a chance to win PPV codes and signed prizes.https://t.co/BvJBe6skMO

We believe the most remarkable result, beyond the obvious brand lifts, is seeing how Metro has changed the fan’s pre-fight behavior and positioned a sponsor as a trusted and entertaining media outlet for fans to get content and news. This has also generated organic media coverage of the broadcast by creating content around newsworthy topics, delivered in large part by the fighters themselves.

Can you share a bit about any research that your team conducted while developing this engagement strategy?

First off, we worked very closely with our partner agencies and clients to develop insights around how to best engage and talk to the fan during these key windows and it is truly a team effort. We also kept a close eye on the UFC media landscape and consumption trends to help us make informed decisions around where to talk to the fan and how to bring programs to life. Additionally, we worked with the brand to conduct a brand tracker that not only measured awareness and consideration of the brand and sponsorship but also surveys fans on what they would like to see most from partners and Metro specifically moving forward. We have even conducted focus groups in living rooms of Avid and Casual fans to better understand how they consume the sport and help drive our decisions around engagement strategy.

Lagardère Plus was one of only 25 inaugural Hashtag Sports Award winners. What does this honor in engagement excellence mean for Lagardère Plus and The Metro by T-Mobile Purple Couch project?

We look to Hashtag Sports as a leading platform in sports business, and to be recognized as a winner in engagement excellence amongst so many great brands and properties is a huge deal for our company. We exist to create this type of excellence for our clients and will strive to continue to do more every day to feature more clients/programs in the years to come.