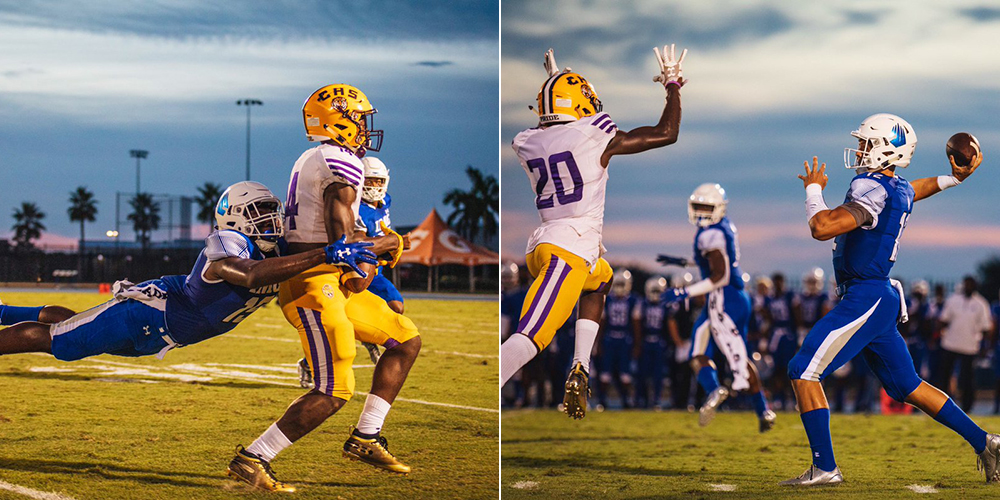 There’s something special about high school football that keeps us coming back for more. It’s a chance for the stars of tomorrow to showcase their talents under those Friday night lights. It’s the place where anything could happen. It’s the great game of football in its purest form.

However, for many of these athletes, high school will be their final chance to grace the gridiron. Even though they might possess the talent to play at the collegiate level, the lack of exposure may ultimately lead to never getting scouted.

But now, thanks to Overtime SZN, high school football fanatics can relive the most unbelievable moments while getting to know their new favorite players.

The talent level surrounding high school football continues to become even more litty as the years progress as kids are training like pros these days. Where else are you going to find the best team in Hawaii putting in work?

The game is definitely reaching new heights and Overtime SZN is making sure you do not miss any of the action. Now there are stars you’d never expect making waves.

While you mostly know Overtime for their fire high school basketball content, they don’t just stop there. They’re strapping up for the high school football season and the SZN got you covered.

Meet Overtime Larry, the video host creating content with the next generation of athletes


Overtime has indubitably established themselves as the “go-to” platform for the next generation of athletes and fans.

Sam Howell even made the ref fall 😂 @samhowelll

Overtime SZN is for the football culture, and for the future of sports. Their primary goal is to get the youth of today more exposure. What they are doing goes beyond just highlights, they are helping tremendously when it comes to the recruitment process.

They feature all of the biggest football stars of tomorrow with major implications in college football and NFL in the coming years.

Recently, Overtime raised $9.5 million, has partnered with many investors, including Andreessen Horowitz, venture capital firm Greycroft, former NBA commissioner David Stern, and Kevin Durant of the Golden State Warriors to ensure they fulfill their vision of becoming the “ESPN of Generation Z.”

According to Dan Porter, the CEO of Overtime, believe’s a network catering to the younger audience is the company’s best route. Porter expressed his vision during an interview with TechCrunch:

Through a lot of experimentation, we found these young audiences were really connected to these young kids who might be professionals in 12 to 24 months. No one had ever built a national platform. Some of them, because they’re the first generation of digital-native athletes, have hundreds of thousands of followers — more than professional athletes. There’s a whole kind of interest around them and subculture around them.

With over 327,000 YouTube subscribers, close to 200,000 Twitter followers, and over 404,000 likes on Facebook, Overtime is essentially everywhere. Most importantly, they are presenting sports in a way that is directly relatable to the youth.

Overtime is dedicated to the youth and tapped into the culture. They even encourage their fans to submit to them the sickest highlights they’ve captured so they can be featured on their various platforms.

We see you Bryce Young!