65% of Kids Now Watch Their Favorite Shows on YouTube, Streaming

65% of Kids Now Watch Their Favorite Shows on YouTube, Streaming

Are you in full panic mode yet? Are you calculating how many years you have left in the sports industry before you have to switch careers?

Instead, understand what that oft-heard claim really is—a cry from those mourning the loss of knowing that their sports-loving kid audience was parked in front of their TV.

It’s a lament from those who know that as recently as 2013, 61% of America’s kids ages 8-15 told KidSay that they most often watched their favorite TV shows on “regular TV channels.” Today that number is 25%.

But that panicked mourner is not you. If it were, you wouldn’t be reading this post. You are likely here because you realize that kids are not rejecting sports.

Kids are still getting the sports they love but instead from platforms that are harder to measure.

They are not sitting in front of the TV gobbling down whole games as their parents did; they are consuming bite-size sports highlights on their smartphones dozens of times a day.

You know that today’s kids are among the 65% of kids that say they now watch their favorite shows on streaming services such as Hulu, Amazon Video, Netflix and, most importantly, YouTube.

The Revolution Will Not (Necessarily) Be Televised


How Monumental Sports is redefining the bundle for millennials and building a sustainable strategy.

Why is YouTube the most important streaming service? Because it is the platform that’s the main driver and the main beneficiary of the change in kids’ media habits.

To understand YouTube’s dominance, let’s start with what America’s kids tell KidSay about it. Every age and gender demo we track, from 5-year-old boys to 15-year-old girls, name YouTube as their favorite website. Not only that but for tweens and teens, YouTube is the highest ranked website since KidSay began its Trend Tracker research 17+ years ago. 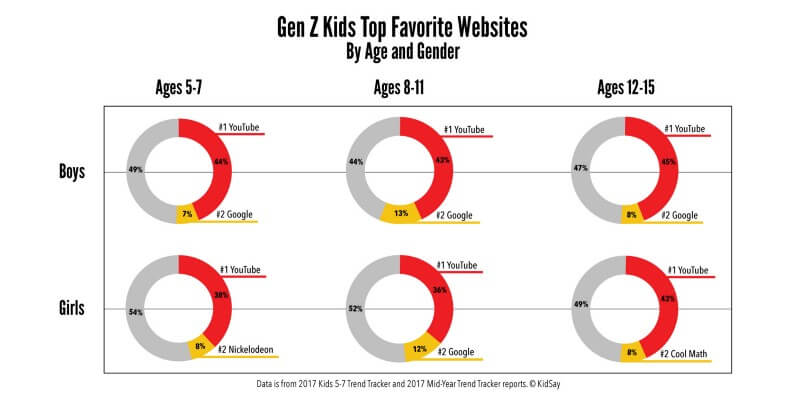 YouTube has not only benefitted from the change in kids’ viewing habits, but it has also shaped them. In 2013, 13% of kids said that the thing they most often do on the Internet is watch videos. Today, it’s 32%.

What does this move to YouTube mean for kids and watching sports? It means that to capture the attention of Gen Z, the sports industry has to meet kids where they are. It has to adapt the product to meet kids’ viewing habits. It has to make sure that its most entertaining, funny, and inspiring moments are captured in exciting vignettes that provide kids an experience in the style they want it.

Sport has to invite collaboration. It has to leverage the power of the kid fan base. It has to develop relationships with kids and the influencers whom they trust to curate their interests. It has to understand that to capture the hearts of Gen Z, it has to know and respect Gen Z.

Sport must not panic because today’s kids are different from any that came before. Indeed, kids are not different, but they do have different ways to experience their love of sports.

Terence Burke is the SVP of Research at KidSay, and co-creator of KidSay’s Trend Tracker, a noted research report that many of the world’s most successful companies rely upon to understand kids and their rapidly-changing world. Connect with Terence here and here.

NBA Launches New App for All of Its Content