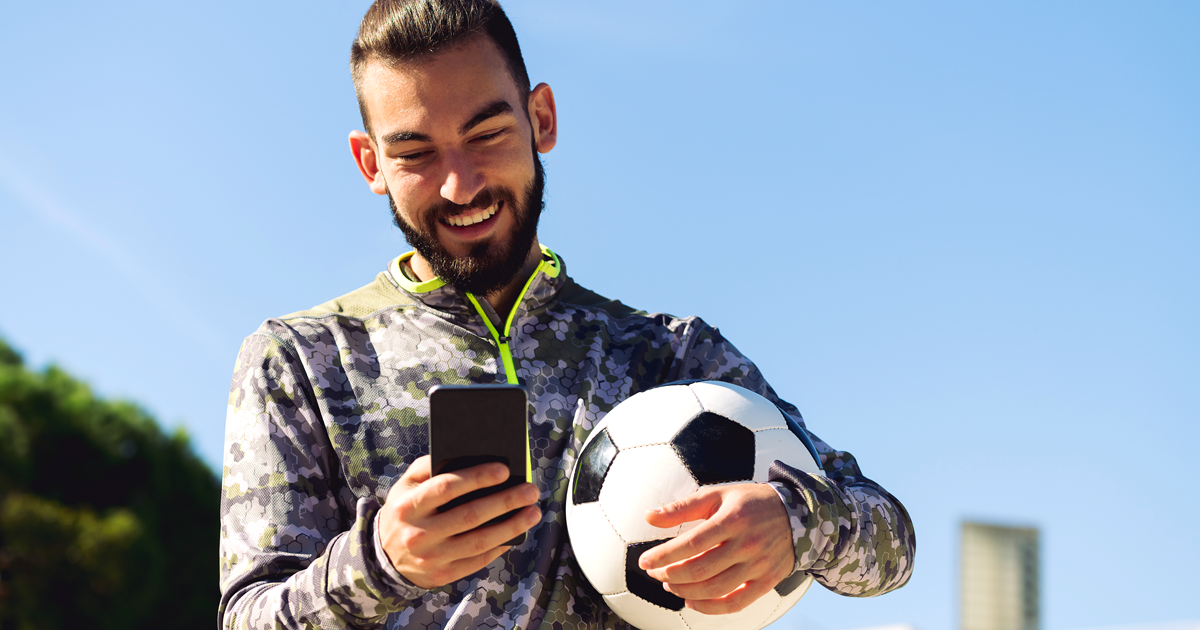 While you were quarantining this past year and living with so much uncertainty, you may not have noticed that the face of sports has irrevocably changed.

But your fans noticed. And this dramatic shift has turned every sports marketing playbook on its head.

The same people that sports fans were watching on TV screens now fill their mobile screens and social media feeds as well — creating a 360-degree experience during each game and far beyond the final whistle. These people are the most vital, valuable partners sports marketers have today. But they aren’t broadcasters or advertisers — they’re the people building authentic and personal connections directly with fans. Your athletes.

The Power of Now

As sports were disrupted in 2020, this permanent consumer shift to digital media and social channels made athletes the de facto face of your sports organization. Fans are hungrier than ever for sports content and conversation, and athletes have — by any measure — more interaction with them on social media than any league or team. On Instagram alone, most of the sports-related accounts sports fans follow belong to athletes. They also offer the most promise for driving the reach and value sports entities can deliver to any partner.

The crazy thing is, you might still think that your players aren’t interested in being your brand partners or doing ‘extra work’ to promote their team or league. You couldn’t be more wrong.

Here at Greenfly, we’ve been working with some of the biggest sports organizations in the world — from UEFA to Major League Baseball to NHL teams — as they’ve welcomed athletes eager to collaborate and found success co-creating media with them. More than 95% of MLB players aligned in saying “Thanks” to the league for giving them the media they had to beg team photographers for previously.

Athletes have recognized the importance of developing their personal brand to maximize endorsement opportunities during their sports career and beyond. And now they need your help. If they can’t build their personal brand, they certainly won’t be able to help to increase the value of your organization’s brand. With the shift in consumer behavior, it’s simply imperative that you start embracing them as marketing partners moving forward.

Want to increase fan reach on social by 2,000% or more this year? Paris St. Germain — already incredibly popular — did it in just a half a season by supporting their athletes’ social efforts.

The Athlete as a Brand

Just as every sports franchise has brand value, athletes today realize their name and likeness is also a valuable brand. Their brand. And similar to alignment with a sponsor, working alongside players builds value for both parties at the same time.

Today’s savvy athletes (and their agents) understand how critical and empowering it is to build their public personas. They’ve also seen the recognition and rewards that a strong digital presence has brought to their peers. What many players are doing off the field on social is now rivaling what they do on the field in bringing value to brands, sponsors, and themselves. They’ve become storytellers and tastemakers in a time when fans everywhere are searching for connection and affirmation.

For athletes, there isn’t a lack of enthusiasm for helping their sports brand extend their reach and engagement with fans. It’s often simply a case of not having the right intrinsic benefit— the ‘what’s in it for 'them’ part of the equation.

The One Thing Athletes Want From You

I’m happy to say that we know what that benefit is now, and it’s something you already have. High-quality media — photos and videos of that athlete doing “their thing.” They want to share their personal experience of scoring that goal, slamming that basket, or hitting one out of the park. The hard part? Finding an easy and rights-managed way of getting that media to them on a regular basis. Athletes simply don’t have the media to go along with their narrative—they’re a bit too busy competing to take a selfie.

Sports organizations, on the other hand, have become media companies in their own right. Most have tons of videos and photos sitting in storage, unused and inaccessible to your athletes. You can unleash this short-form media — featuring them — to them and help them grow their status as the face of the league or team. This direct personal benefit will entice them to keep sharing on social media. As a bonus, every time they share the media you provide, they’re implicitly endorsing their affiliation with their team and sponsors: Those logos, billboards, and shirts build brand awareness and loyalty.

We’ve seen this work with more than 27 leagues and hundreds of teams around the world. When athletes have media to share, their organization quickly benefits in dozens of ways.

The Production Studio Is Now in Their Pocket

The impact of athlete social sharing on sports franchises has really surprised us this past year. The Rajasthan Royals IPL cricket team used their time in the 2020’s tournament bubble to encourage their athletes to become content creators. The Royals team collected authentic, original, unscripted videos from players during their hotel stays, at workouts, doing regular daily routines, and more. This content resonated with fans, creating lengthy social conversations and making fans feel included in the athletes’ lives. Players also participated in some of the team’s sponsor and cause-related content campaigns during this period, building more brand value along the way.

This type of media co-creation with athletes is putting a spotlight on the athlete-team partnership. In this period, fans are seeking more informal, short-form mobile content, and athlete collaborations have come at the most opportune time. Authentic clips are beating more expensive agency-created content on every social channel and regularly outperform the long-form video that teams are making themselves.

And sports brands are able to distribute this short-form content globally and in real-time. Deutsche Fußball Liga (DFL), the organizer of the Bundesliga, launched their Social Media Matchday Feed at the beginning of the 2020 season. Exclusive behind-the-scenes and athlete-focused Bundesliga content from every match goes to the clubs, the league, and over 60 international right-holding broadcasters and media partners, thrilling football fans everywhere.

The Results Speak For Themselves

Globally, leagues and teams that recognized early the potential of athlete-driven media have really reaped the rewards. They’ve garnered exponential returns across the board, from tens of thousands of new media assets to upwards of 2,000% increases in fan social reach and 10x boosts in engagement. They’ve seen large gains in sponsor and media partner commitments and media value. And they’ve built stronger relationships with their athletes — their #1 marketing partners — in the process.

The dramatic increase of time spent on social media, media distribution and co-creation with athletes is an inevitable and a welcome shift for those that embrace it. It reduces the overall costs of marketing and promotion, and it benefits the league, team, athletes, sponsors and fans at the same time. The sports organizations that have welcomed their athletes as their collaborators, the human face of their franchises, and their biggest social influencers, have seen an almost immediate growth in affinity, reach and value. These organizations will undoubtedly see increased monetization opportunities in merchandise sales and sponsor revenue in 2021 and the years to come.

Daniel Kirschner is the CEO of Greenfly. Kirschner has had a varied career holding senior roles spanning law, technology, and business, including as President of the Harvard Law Review, Senior Advisor on Internet Policy at the FCC, and Head of Corporate Affairs at Activision Blizzard. Through his experience, Daniel has come to appreciate the many challenges, risks, and opportunities corporations and brands face in creating and sharing original digital content.

Learn more about how to effectively engage the modern fan & consumer at Hashtag Sports, an annual conference designed for sports and entertainment professionals.