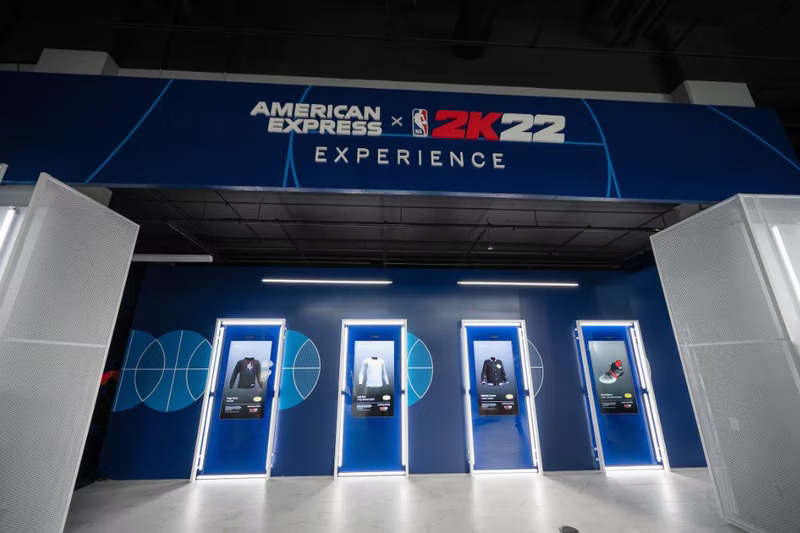 500K NBA 2K fans joined us either in person or via the Twitch stream.

Objective: American Express has a long-standing relationship with the NBA and its fans. Over the years, that relationship has evolved to include lifestyle elements such as merchandise collaborations with world renown trendsetters and Jersey Assurance, a first-of-its-kind benefit allowing Card Members to replace their jersey for free if their player changes teams within a year of purchase. So it only makes sense that Amex would include NBA 2K fans in their programming and Card Member benefits..

But reaching gamers and creating a compelling interaction takes more than an offer of free virtual currency (see Activation Background below). They need something worth stopping for. Like the Amex NBA 2K22 Experience.

An IRL pop-up store next to Crypto.com Arena offering physical gear and highly sought after digital merchandise for your in-game player. From a face scan studio to discounted NBA merch for Card Members to a NBA 2K22 match-up headlined by WNBA MVP Breanna Stewart and All-NBA forward Paul George livestreamed on Twitch, Amex created an activation that interested NBA2K gamers.

Immersive Sights and Sounds: With wall-to-wall mirrors, Card Members and fans were able to experience the “Infinity Cube,” an immersive journey into the sights and sounds of NBA 2K22.

Access to Physical Merchandise and Services: NBA and WNBA merchandise was available for purchase, in addition to complimentary sneaker cleanings throughout the weekend. As an added bonus, Card Members received a 25% discount on all merchandise purchased with an American Express ® Card on-site at the American Express x NBA 2K22 Experience.

Fans around the world could also join The American Express x NBA 2K22 Experience by tuning in to watch on Twitch.