FanDuel is Leading the Charge for Women in Sports Betting 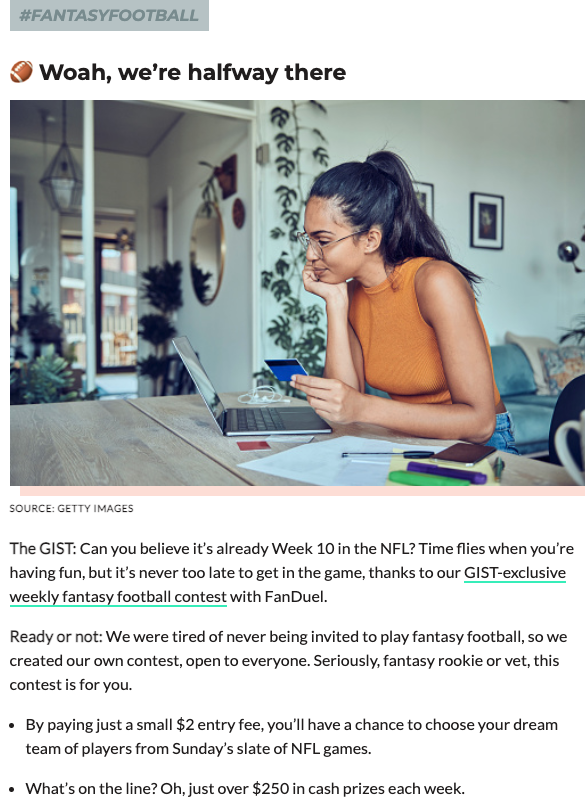 50% of sports fans are women, and approximately 10% of sports bettors are women, so there is an untapped opportunity to bring sports to an underserved audience. The partnership between FanDuel and The GIST had a sole purpose of moving the industry of sports betting forward to an environment that is welcoming and inclusive of all sports fans. FanDuel is proud to have a female CEO at the reins, and recognizes the importance of making female sports fans feel included in the community. FanDuel understands the responsibility that comes with being the operator leading the charge for inclusivity and diversity in a male-dominated field and hopes to see this partnership’s importance ripple throughout the industry.

Objective: One of the things FanDuel is most proud of is the commitment as a company to promoting women in sports as they firmly believe in gender equality. FanDuel is the only major US sports gaming company to have a woman at the helm – CEO Amy Howe, is the only female CEO at a sportsbook operator in the U.S. In what is undeniably a male-dominated industry, Amy understands first-hand how important it is for the sports industry to be inclusive of and welcoming to women. Amy is one of four women executives among FanDuel’s nine-person C-suite, attributing its increase in female leadership to FanDuel’s culture and prioritizing diverse experiences. This resonates deeply with The GIST and its mission to level the playing field in sports and bring long-absent womanpower to the forefront of the traditionally male-dominated industry. The GIST, a female-founded and led sports media brand, proved to be the perfect partner as their mission completely aligns with FanDuel's.

Strategy & Execution: FanDuel understands that female sports make up a large percentage of modern sports fans. FanDuel and The GIST worked together to provide a welcoming, non-intimidating fantasy contest exclusive to members of the GIST community. The GIST also created fun and engaging newsletters, social and podcast content around NFL football to educate, inform and entertain its audience and give them the push to try something new and participate in fantasy with other GISTers.

Results: FanDuel and The GIST ran two leaderboard style daily fantasy contests, including the NFL Regular Season & the NFL Playoffs.
FanDuel provided GISTers the chance to win $500 weekly, as well as a grand total of $5,000 in prizes given out at the end of the contest. This included The GIST swag and $2,000 given out to the main winner of the leaderboard series.
Drove nearly 4,000 total entries, 1,200+ new registrations & 500+ first-time depositors onto the FanDuel platform.
Leaderboard campaign drove nearly 500 total entries in three weeks with over $5,000 in prizes given away to GIST users who participated in the contests
NFL Super Bowl: Ran a free-to-enter Super Bowl contest exclusive to all GISTers. FanDuel gave away $1K in DFS cash prizes and the top three winners won $300 in gift card prizes selected by The GIST.
Resulted in 700 total entries into the contest, which was the highest for all NFL 2021-2022 season
273 new registrations, which was the highest total for any two weeks during the partnership.
New user interest was the highest towards the opening weeks of the NFL season. We saw those users consistently come back and play each week.