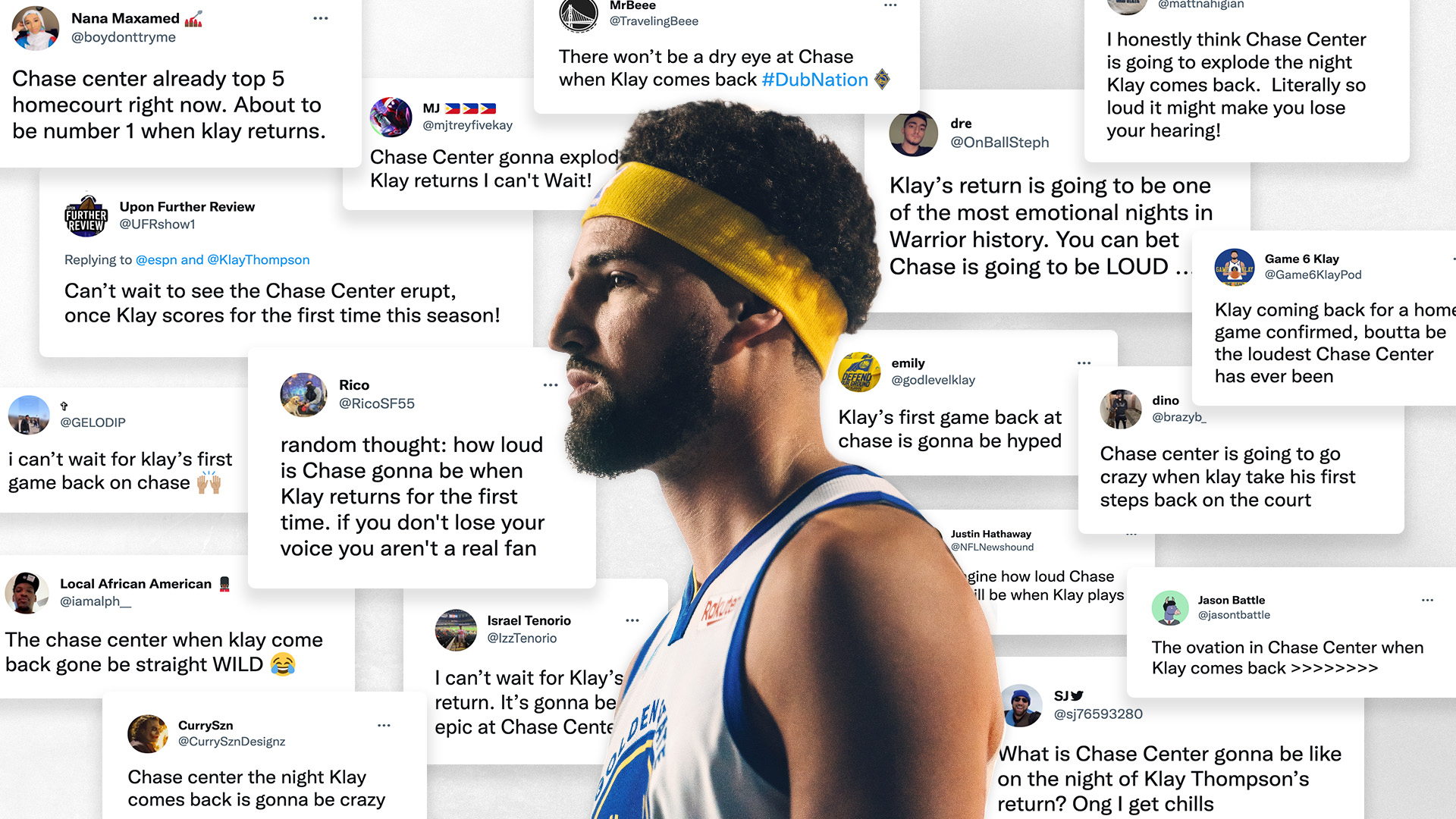 On January 9th, 2022, after 905 days of not playing in an NBA game, Klay Thompson made his triumphant return to the court in a Golden State Warriors uniform. In one of the more impactful moments in franchise history, both @Warriors and @ChaseCenter sought to use Twitter as a medium to tell the story of Klay’s return, while bringing “Dub Nation” behind the scenes at Chase Center for a night that no Warriors fan will ever forget.

Twitter is the digital world’s sports bar, and our various accounts serve as a hub for our fans to interact with our team and players, as well as each other. This is only heightened with a moment as prominent as Klay Day. By utilizing both our team handle and our arena handle to tell different parts of Klay’s story, we were able to provide a true 360-degree coverage experience for our worldwide fan base.

Objective: Knowing Klay Thompon’s return to the court was imminent, our team had a few primary goals for what we knew would be a colossal event:

In thinking about how we could accomplish each of these goals, we realized that we needed to leverage our Twitter audiences on both @Warriors and @ChaseCenter. While we could tell the story of Klay’s return, and the impact that said the return would have on his teammates, effectively on our Warriors’ Twitter channel, we sought to utilize our @ChaseCenter arena handle to showcase the fan story, and to elaborate on what this moment meant to them.

Strategy & Execution: @Warriors and @ChaseCenter combined to provide 360-degree coverage of Klay’s return.
Our @Warriors account focused on the basketball story behind Klay’s return, and the emotion that both he and his teammates were feeling.

Our @ChaseCenter handle sought to showcase the fan experience behind Klay’s return and tap into the excitement that Dub Nation was feeling about No. 11’s first game in Chase Center.

Announcement
-Let the fans tell the story, sourcing tweets expressing how excited they were to see Klay play again, but for the first time at Chase Center.

Game Day:
- Live coverage from the fan perspective, posting updates from the fan fest in the plaza, videos from the bowl as his name was announced and shooting his first basket
- Use of Twitter Voice to give an extra emphasis on the powerful moment that he was announced during the starting five

Results: “Klay Day” was an event that captured the attention of the entire basketball community, leading to one of the better all-around engagement days on our Warriors and Chase Center Twitter handles.