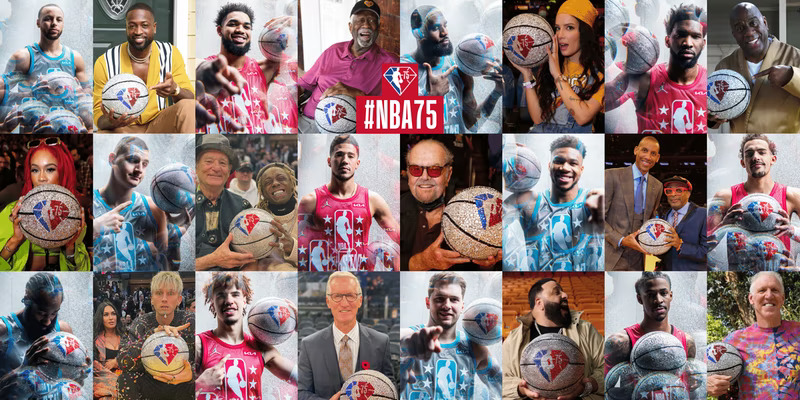 The NBA social team was challenged with coming up for a season-long social media campaign for the NBA’s 75th Anniversary Season. This submission discusses the strategy behind the #NBA75 campaign and the creative elements that were brought to life during the diamond season.

The #NBA75 campaign had a presence daily across NBA Social. From the announcement of the team, the release of the ‘NBA Lane’ marketing film, daily ‘Memory Lane’ historical content, to the diamond ball, the NBA’s 75th Anniversary Season was a monumental celebration worthy of its name. We saw NBA players, legends and celebrities interact with the campaign across social media, including posting photos of themselves with the diamond ball and sharing NBA-designed posts about the NBA 75th Anniversary Team, as well as other notable moments throughout the season.

This campaign leveraged each social media platform to elevate the messaging and drive conversation in unique ways that challenge the industry to create cohesive season-long social media campaigns.

Objective: The NBA celebrated its 75th Anniversary Season during the 2021-22 Season, using #NBA75 across social media platforms to commemorate the landmark season. NBA 75 was a culmination of transcendent players, extraordinary moments and remarkable teams. An homage to exceptional talents and unforgettable flashes in time. NBA 75 not only honored where the NBA has been, but celebrated everywhere it is going.

To celebrate the diamond anniversary on social media, the NBA built a campaign to bring awareness and educate fans on the history of the game. The objective for the NBA social team was to extend the NBA 75 messaging on social with season-long content executions to showcase the history of the game and promote the league’s current and future stars across the @NBA media social accounts.

Strategy & Execution: An initial touchpoint of #NBA75 was the 2021 NBA Draft. NBA Social brought the celebration of #NBA75 to life by designing a ‘diamond-encrusted’ basketball to be the centerpiece of the night and connecting the future stars of the game. The special anniversary ball became a staple #NBA75 content series for the NBA. It connected legends, current players and future stars, celebrities and fans, and became an iconic feature of the #NBA75 marketing campaign. The ball was even included in both a Snapchat and Instagram AR effect and as a Snapchat Cameo. The ball was also a Mixed Reality element during the celebration of the 75 team.

The campaign film, “NBA Lane,” premiered on @NBA social, along with behind-the-scenes elements from the shoots and received an overwhelmingly positive reception from media, fans and players. “NBA Lane” was also brought to life through an AR effect on both Snapchat and Instagram. Building off of the ‘NBA Lane’ concept, NBA Social developed a content franchise called ‘Memory Lane’ to celebrate top moments in NBA history that happened each day throughout the season. And on @NBA Twitter Spaces, NBA legends shared the story of their careers with fans through the series “My NBA 75”.

Results: Results from #NBA75 across NBA social media accounts with the Playoffs still to come: