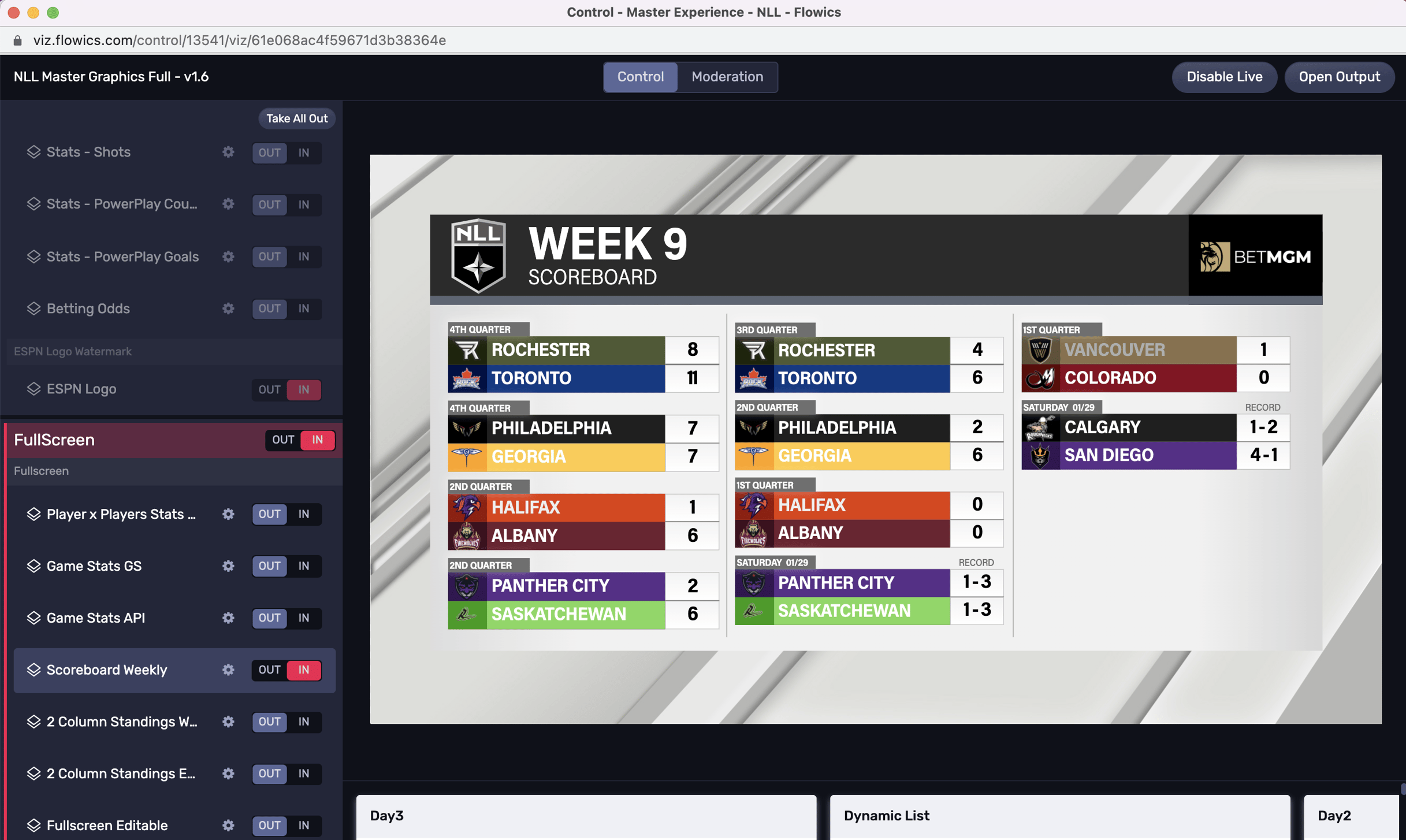 The NLL launched a connected network of innovative broadcast technologies in the live sports production space to help substantially drive the league’s key revenue streams, including sponsorship, betting, and e-commerce.

Technologically, the key is the ability to take live video, audio, and clock/scoring data from venue to remote studio, produce the shows and distribute them to ESPN/ESPN+, TSN, and teams’ local broadcast partners as well as other simultaneous productions that allows for live ‘look-ins’ to other ongoing NLL games.

To get live scoreboard data from venue to production, Flowics incorporates live scorebot API data into its cloud-based graphics platform generating a customized scorebug for each game. The web-based scorebug is then incorporated into the production workflow for every game-includes multiple states to display the shot clock, penalties, power play, goal info along with sponsor elements.

Flowics handles insert graphics for most of the remote productions. Chyron graphics developed for the more traditional linear productions are translated into HTML5 graphics. Because the platform is web-based, every production and team has easy access to graphics for each of its game. Additions of new graphics and commercial sponsors are simple. The Flowics platform alos integrates official NLL live data and stats from the NLL’s official data partner, streamlining the production workflow by allowing most graphics to update automatically. Flowics also allows production to curate social media and other interactive elements into social media.

Objective: On the heels of breakthrough deals with ESPN and TSN, the NLL has created an innovative remote broadcast production model (ecosystem) to produce and distribute broadcasts of all NLL Games for both linear and OTT consumption. The model incorporates a unique blend of remote (remi) production and cloud-based technologies powered by an IP transmission ecosystem that allows for broadcast quality delivery to national and local takers as well as to simultaneous productions. It allows the NLL to produce high quality and entertaining broadcasts in an efficient manner without having the resources of bigger leagues.

Strategy & Execution: Through working with production partners who offer technologies beyond the standard (arguably antiquated) linear viewing experience, we are providing complete NLL games as well as short-form (i.e. highlights and recaps) game play to digital-first, next gen fans.

Results: Using this model, digital streaming viewership is up over 143% on TSN.ca and ESPN+ over the prior season. The league’s broadcast team is delivering live broadcast feeds to multiple takers including TSN, ESPN and the team’s local partners. In all, the league will distribute over 75% of its schedule to team local partners. The model also benefits the league’s new commercial sponsor partners in that productions have access to acquire and reliably execute the required deliverables.