Pepsi x Made For Football Watching

As the 2021 NFL Football season approached, Pepsi wanted to go above and beyond to help football fans reignite their passion for game day rituals, because Pepsi knows that football fans don’t just watch football. They live it.

It’s what turns three hours on game day into something worth talking about all week long. It’s more than just Football watching.

To support Pepsi's Made For Football Watching Campaign, we developed a recipe-centric Augmented Reality experience.

An ‘add to cart’ feature to drive conversions at local supermarkets

Pepsi went above and beyond during the 2021 NFL Season to provide fans the unique opportunity to cook gameday grub with NFL athletes right in their home, while exploring new ways to express their unapologetic joy for Pepsi.

These AR Experiences are a template for how brands can:
Leverage their sports partnerships
Leverage their athlete ambassadors
Extend their partnerships beyond the field of play
Build campaigns around rituals
Enhance local relevance on a regional scale
Drive effective consumer engagement and business performance.

Objective: During the 2020 NFL Season, Pepsi's Made For Football Watching Campaign featured many COVID friendly activations and content as fans were prohibited from attending games in person. One of the most popular items was their recipe content. Pepsi fans literally ate. it. up.

To capitalize on their 2020 momentum, Pepsi challenged us with these specific goals for 2021:

Strategy & Execution: At the heart of Pepsi's Made For Football Watching Campaign was the team-specific microsites where Pepsi hosted their exclusive prizing, digital content, and recipe content.

With QR Codes on Pepsi Packaging and digital content driving users to the team-specific microsites, our plan was to develop an AR Experience that fit seamlessly into these microsites, and could be accessed two ways:

The incentive of exclusive prizing was also a strong draw to get consumers to return to the microsites (2x on avg). To encourage fans to engage with the AR, the featured recipes in each experience were updated weekly. For example: in Week 1, Jets fans could cook Pepsi BBQ Sauce with Mekhi Becton, but in Week 2, fans could now cook Pepsi Glazed Ribs with Mekhi.

Additionally, the experience included an ‘add to cart’ feature for recipe ingredients to drive conversions at local supermarkets, a downloadable recipe card for those shopping in-person, and a photo opportunity to ‘pose-with-the-pros’ and share your finished recipe.

National Level
The MFFW Campaign exceeded the estimated number of registrants by 686% (4.39MM registrants) and total entries by 3.6% (40.5MM) 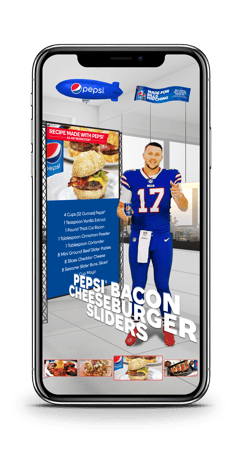