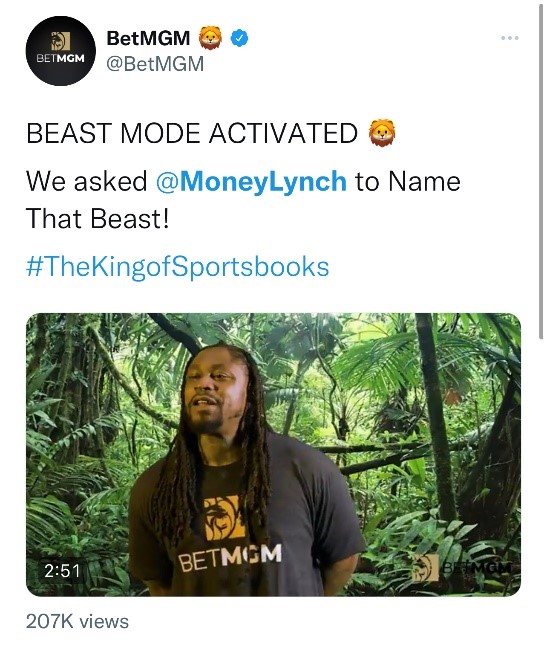 This submission recaps the previous year's immense growth of BetMGM Twitter. BetMGM’s 2021 goal was to take these universal truths and redefine what it meant to be a sportsbook Twitter account.

By refusing to conform and being driven by the need to differentiate itself from its competitors, the BetMGM approach to Twitter has broadened the landscape and audience for all sportsbooks on the platform. No other sportsbook account went as boldly into this new realm of content strategy as we did, and as a result, BetMGM finds itself at the forefront of the sports betting Twitter space.

To truly cut through the noise and saturation on Twitter, any brand account needs to show appeal to a wide audience while also speaking authentically to its own userbase; BetMGM repositioned its content to attract all sports fans, not just those interested in to putting a bit of money down on the best promotion of the day. Today, the brand continues to push industry expectations forward, proving that a boring Twitter feed is just as good as having no Twitter feed at all. So, when we’re asked about representing “Excellence in Engagement,” our answer is simple —we literally redefined the idea of excellence for all of our competitors.

Objective: With a Twitter account comes two absolute certainties: first, followers want to interact with a person, not a brand, and, second, the platform never sleeps. BetMGM’s 2021 goal was to take these universal truths and redefine what it meant to be a sportsbook Twitter account. It was to bring the space, long stuck in the creative content mold of the mid-2010s, into the internet of today and meet our players. To humanize the brand.

So, BetMGM’s Social team set out to create content that incited engagement from followers because no one is as loud, proud, and eager to engage in discourse as a fan. We watched as other accounts outside the sports betting space dared to be different, and realized as a team that in order to cut through the noise, our content needed to stray from the script usually prescribed to big brand accounts. Gone were the days of simple GIFs and ho-hum odds posts; BetMGM used 2021 to step outside of the box and deliver content that its audience wanted to see. It followed the Golden Rule: tweet others the way you want to be tweeted.

Strategy & Execution: The passion from those in seats or at home makes fandom incredible. But, this does not stop when the clock hits zero, or when the final out is recorded. Fandom signals something bigger: it highlights the need for a ’s favorite players, teams and leagues to lift up, inspire, and change lives.

For the modern-day fan, Twitter is a one-stop shop, a must-have for breaking news, a second screen. At home, in the bar, or in-arena, it's there with latest injury information, trade rumors, and detail from beat reporters. Fans refresh the conversation insistently, ruining screen time reports, as the games happen in real time. Today’s fan expects and deserves better content from their favorite sportsbook.

Great content is universal, and could be found in all corners of the internet so, each BetMGM Social team member was empowered to take inspiration from their own feeds. This drove the direction from traditional sports data to exclusive content from ambassadors, groupchat-worthy memes, and timely jokes. Instead of following suit with Corporate America and ending the content flow at close-of-business, BetMGM kept the faucet open and partied through the night, when its audience was most likely to be tracking their bets.

Results: BetMGM is the King of Sportsbooks and crafted its Twitter persona needed to match that energy, so the results were as regal as you’d expect. From January 2021 - March 2022, @BetMGM earned 496.5M impressions, up more than 1000% from the year prior. And, engagements, a true measure of a follower’s passion for your content or brand, were also through the roof; they rose more than 700% to 14.8M in the same timeframe.

BetMGM’s aggressive strategy also drove its Twitter account to become a leader among its competitors as well, taking the concept of what a sportsbook account can be and turning it into something attractive to the masses. Last year, its follower count grew by an incredible 350% (from 50,000 to 225,000), leapfrogging DraftKings and FanDuel to become the most-followed U.S. sportsbook on Twitter.

BetMGM could go on and on about the effectivity of its work on the bird app but, like any good sportsbook, we let the numbers do the talking — and they clearly say we’re the odds-on favorite. Just like the lion in the logo, BetMGM Social dared to be a powerful force in the cluttered Twitter-verse, and rose to the front of the pack as a result.