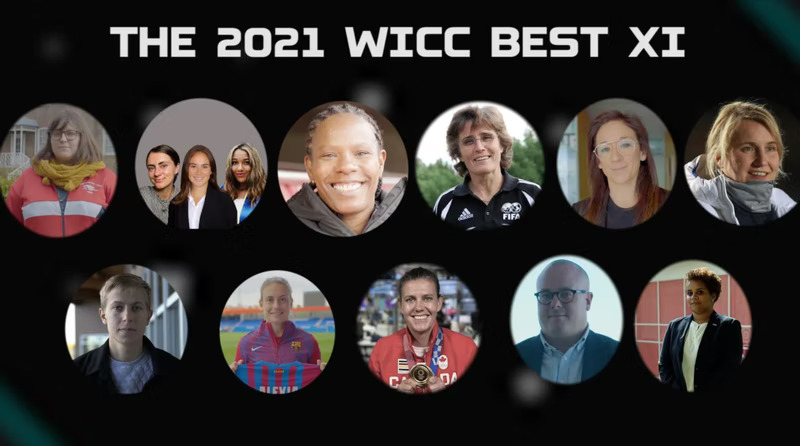 WICC Best XI Presented by Ally shines a light on unsung heroes of women’s soccer while also recognizing well known figures who have made a difference in the sport throughout their careers through an 11-part docuseries highlighting the honorees' stories.

The WICC Best XI project is unique in the diverse breadth of stories it tells from women’s soccer stakeholders across different continents, backgrounds, and career paths. Through personal storytelling, the mini-documentaries bring to light important inequalities that still exist in the sport as well as inspirational stories about overcoming barriers to pave a better future for the game.

Partnering with Ally, the project told stories are not only important to consume for sports fans, but also set a precedent for the industry on the importance of covering the diverse stakeholders across the women’s sports industry. It also highlighted the importance of a brand’s values coming through in more than just in their words, but also in their actions.

By telling engaging stories not only about the athletes themselves, but the journalists, activists, executives, and coaches that are driving the game forward, the Best XI project provides a 360 view of the growth of the women’s game at a global level, tapping into different perspectives and moving the industry forward through inclusivity.

Objective: With the goal of expanding our footprint in women’s soccer and reinforcing our commitment to the growth and development of the sport, Relevent Sports Group launched the Women’s International Champions Cup Best XI Presented by Ally in 2020.

Ally has been a partner of the WICC, an annual women’s soccer tournament between top European and American clubs, since 2019. In the first year of Covid, Ally worked in collaboration with Relevent to create a women’s sports platform that was accessible and impactful despite the absence of physical events, leading to the launch of the WICC Best XI Presented by Ally.

The creation of the WICC Best XI enhances Relevent and Ally’s support of women’s soccer through an in-depth, multi-part content series honoring eleven people across the world who are doing the most to advance the game.

Successfully executed in a pilot program in 2020, the 2021 WICC Best XI expanded programming to include more diverse stories across the world of women’s soccer through in-person interviews repurposed in short mini documentaries.

Strategy & Execution: Building off a successful 2020 program, the 2021 WICC Best XI shined a light on unsung heroes of women’s soccer while also recognizing well known figures who have made a difference in the sport throughout their careers.

After the honoree selection, we sent a film crew to visit each of the winners and record an in-depth interview touching on themes that are important to the modern sports fan: diversity, advocacy, and impact, along with the highlights of their career.

These pieces were edited into snackable clips designed for consumption by the modern sports fan and aired across the WICC and International Champions Cup social channels as well as DAZN’s platforms.

Strengthening their integration in year two of the content project, Ally owned a standalone ‘Who is Your Biggest Ally?” content segment where each winner shared who has been their greatest Ally throughout their careers. This custom branded clip complemented Ally’s larger integration into full project which saw their brand presence featured throughout the 2021 WICC Best XI intro video as well as each of the eleven winner videos.

With a diverse range of stories told and segments of the sport represented, the series was able to maximize reach through a content slate that appealed to different segments of the multifaceted international soccer community. DAZN shared each video across their global platforms, which increased exposure across the global sports community.

Additionally, creating a custom segment for Ally that was authentic to their brand objectives allowed us to achieve our goal of deepening our partnership to create meaningful content that was endemic to both of our brands.